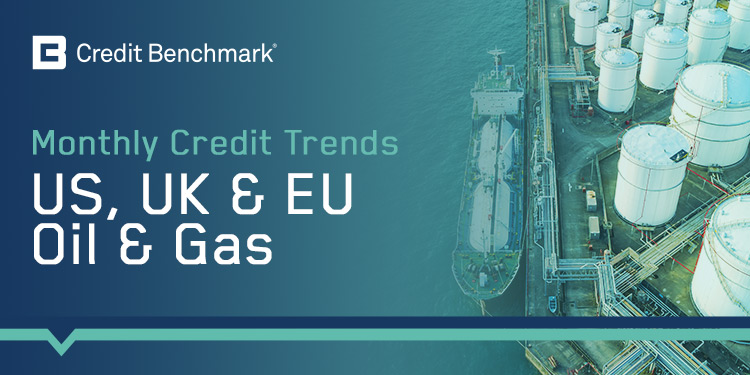 Problems in the energy sector are far from new, and are continuing to worsen slightly each month. This is particularly true for the US and UK energy sectors which have seen a great deal of volatility and distress in the last year or so. The picture isn’t so dire for the EU energy sector however. While far from immune from the problems facing US and UK companies, EU Oil & Gas firms are nevertheless something of a bright star amongst the industry. But the impact of COVID lingers for all three sectors and only time will tell if any of the positive signs emerging at the end of 2020 will have a lasting effect.

Persistent deterioration in credit for the US energy sector continues to add up. The decline in credit quality for large US Oil & Gas firms from the prior update is only around 1%, yet the drop from six months prior is about 24% and the year-over-year drop is even larger at about 54%. Average probability is now 57 bps. While that is a small increase from the prior month’s 56 bps, it’s much higher than the average probability of default six months prior at 46 bps, or 37 bps at the same point last year. Approximately 82% of firms have CBC rating of bbb or lower, and the aggregate’s average CBC rating is bb+.

Credit quality continues to get worse for the UK energy sector. Large UK Oil & Gas firms saw a drop in credit quality of about 1% from the prior month, while the six-month decline was about 12% and the year-over-year decline about 25%. Average probability of default is lower than it is for the US, but still rising. It’s still 40 bps, compared to 36 bps six months ago and 32 bps at the same point last year. Approximately 69% of firms have CBC rating of bbb or lower, and the aggregate’s average CBC rating is bbb-.

The EU energy sector continues to be in better shape than its US or UK counterparts. Credit quality for large EU Oil & Gas firms remains largely unchanged in recent months, and it’s down by about 9% from six months prior and about 13% year-over-year. Default risk is lower at 25 bps, compared to 23 bps six months ago and 22 bps at the same point last year. A smaller percentage of firms – currently about 65% – have   a CBC rating of bbb or lower. The aggregate’s average CBC rating is bbb.

Credit Benchmark brings together internal credit risk views from over 40 leading global financial institutions. The contributions are anonymized, aggregated, and published in the form of consensus ratings and aggregate analytics to provide an independent, real-world perspective of credit risk.
Risk and investment professionals at banks, insurance companies, asset managers and other financial firms use the data for insights into the unrated, monitoring and alerting within their portfolios, benchmarking, assessing and analyzing trends, and fulfilling regulatory requirements and capital.